I had escaped Tom Sizemore. After seven blissful nights' sleep, I was rested and began to attack Hollywood with renewed vigor.

I worked a solid six months getting scripts off to studios. I now had one of the top entertainment lawyers in Hollywood in my corner thanks to a Chicago pal, Heath Fear. My new lawyers Greenberg & Glusker made it relatively easy to get in the door with the studios. But without attachments of name stars my efforts were stymied.

I didn't let it phase me. I kept writing new and better screenplays. I was improving steadily as both a director and writer. So treated myself to a new puppy. 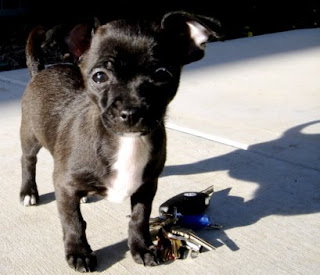 Sophia is a delight and so adorable she literally stops traffic. I was enjoying the new YouTube and decided to follow my success with WAVE and the more sophisticated DESERT SILHOUETTES with a screenplay I had written just after 9/11 about a dog trapped in it's apartment after the master goes missing in the WTC disaster.

I even shot it 4:3 ratio as I thought all it would be was a great exercise for me. But as I filmed my puppy Sophia, using my apartment as the set, I began to realize I had something very special. One of my dear friends Alexandra More saw the work in progress, agreed to play Mother and introduced me to the great Ed Asner. Ed happily agreed to play Father in the film.

8 film festivals later I had my first film project with a name star as Ed loved the short film so much he agree to be attached for my feature film SUMMER RULES. A script he has calls one of the best he's ever read. It's an expansion of the short film that has been so successful on the festival circuit.

Ed was the lead in this summer's biggest animated hit from Pixar, UP. Ed has been kind enough to send the script onto one of pals in the biz to star as the billionaire cowboy Derek Calloway. Fingers crossed. I hope to tell you all about that star attachment here one day.
Posted by sheetzk at 9:02 PM