I hop off the bus, throw open the hatch, dig out my backpack and... Phew.  My trusty Flip cam in there.  We hop another train and it's onto Ostuni. The train is smaller and traveling south along the coast. There no conductor and as we reach the time when I was suppposed to arrive in Ostuni, 5 hours from Rome, I am worried I missed my stop.

A few weeks earlier to conserve money for this trip I switched to Boost Mobile's basic $50 per month service.  I find myself kicking myself for not sticking with my Blackberry Verizon phone as I have no way to know where I am and can't call the resort to know if the delay with crazy bus detour is going to mean I am going to be stranded if I am in fact on the way to Ostuni.  Finally I tell myself to shut the hell up and that it will all work out somehow.  Enjoy the Italian countryside, bitch. 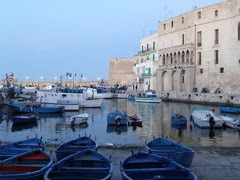 Amazing little cities pass by the train window and we are now 45 minutes late.  I figure if we keep going south the end of the line I can always backtrack and make my way to Ostuni again if I missed it.  We pass an amazing town I want to visit on another trip.  Beautiful architecture that looks like giant layered tiramasu in a town called Monopoli.

It looks like a paradise.  A paradise I've never heard of before where life goes on every day without ever a thought about we people working like slaves to a dream that died a while ago.

Then Monopoli is gone and I wonder why I was ever worrying about making it to Ostuni.
Posted by sheetzk at 9:10 PM No comments:

Working my Way to Puglia Italy

Sorry I have been away.  Far away in both body and spirit. For years I've read, written and watched science fiction voraciously.  Today I am living science fiction.

I've been filming social media for YouTube for Bradley Quick, which led to my meeting an amazing new client for my fledgling business BuzzBroz.  The cleint is Connie Miller, founder of an group therapy workshop she holds all over the world called Souldrama.  Souldrama teaches you how to lead a more soulful existence.

Now, I am a regular Joe from the Midwest, always will be, Hollywood can't take that out of me.  So when Connie insisted that in addtion to making her YouTube videos that I take the class in Puglia Italy at the amazing private resort she booked to our exclusive use for Souldrama, well, I almost didn't go.  I kept making excuses not to go, not enough money, it was a barter deal after all and I did not want to do group therapy.  I'd not done any therapy on myself for a good 8 years. 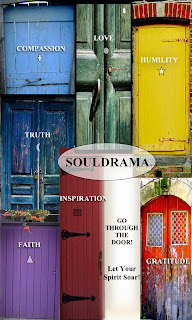 But Connie and Bradley would not give up on me.  So eventually I was set on going to Italy.  The last time I went to Italy, 20 years ago, I was a mega real estate developer building Oprah's TV studios and 38 story $162 million skyscrapper.  Now, post divorce and post financial disaster I was a struggling artist, signing for his supper making YouTube videos.

20 years ago I was rich in money but poor in spirit and now I was poor in both departments. I lost my faith on the way to Italy reading THE HERO WITH A THOUSAND FACES by the great Joseph Campbell, who opened my eyes to the fact all religions share common mythologies.

Now, in 2010, Italy was calling me back for a new kind of spirituality, one that infused my belief in a great universe we all share as spiritual beings having a human existance, to borrow from Wayne Dyer.

As the time to go to Italy approached I worked intensely to make the trip.  No $162 million dollar project to pick our marbles for the lobby to back me up this time, I had to make many little YouTube videos, do Twitter work and Facebook assignements to earn my way; the fees in the hundreds of dollars this time instead of the hundreds of thousands like back in 1990.

I did social media for an amazing client I met through Bradley named Filippo Voltaggio.  A larger than life American Italian, Filippo hosts a New Age show called Life Changes.  And after doing a lot of work on spec for a percentage of YouTube ads I was forced to start charging him as Google ads I've learned, unless you have videos consistently getting millions of views, are not going to make you much money.

But I love the subject matter Filippo covers along with his producer and Reiki teacher Dorothy Donahue, an amazing woman in her 60's.  A motherly figure who watches carefully over her New Age flock.

One day Filippo called me that he had filmed an interview with famed ET expert Sheldan Nidle about his views on the coming "Shift", all centering around 2012.  Filippo needed the video edited and posted to YouTube.  I agreed because I wanted to learn more about "The Shift".   As you'll see in this video from the 6 part series on YouTube, I learned more than I bargained for.

See what I meant earlier in this post about living science fiction?

Sheldan's calm description of the collapse of banks, nations, mountains falling and rising, tectonic plate shifts, aliens reprogramming our DNA left me shaken.  His great certainty about it all was unnerving.  But I worked some long hours and got the videos loaded but they were hard for me to watch even though I'd help make them.

The last few days before Italy were spent in Las Vegas covering social media for Bradley Quick and his Quick Fix talk show.  Bradley is the single worst driver I have ever met.  And as we left Hollywood for the 5 hour drive to Vegas I wondered if my trip to Italy would be cut short as Bradley zig zagged through traffic with our assitant for the trip screaming at him to slow down and drive with his hands on the wheel.  Bradley is a notorious text and drive guy.

But somehow we made it into town and despite trouble with the assistant, an Italian/Iranian woman with attitude like I've never witnessed -- who we had to let go, and who's parting crack was that I was Bradley's wife -- we managed to make a beautiful collection of videos and I had money for Italy just in the nick of time.

The flight seemed easier compared to 20 years ago.  Perhaps because I was imagining travel to be tougher post 9/11.  But it was a breeze.  My passport sailed me along.

I staggered onto a train to Rome from the Rome airport and the first thing that struck me was the amount of graffiti lining the train's path.  The city was not the same.  The pristine Rome of 20 years ago was not to be found.  Of course I was in a far richer hotel at the top of the Spanish Steps in 1990.  Now the Lira was no more, replaced by the Euro and the exchange rate was terrible.  I had to Western Union home to friends and my brother to be able to afford my way to Puglia.

I had little money to spend during my 2 days in Rome.  So I tried to get some social media gigs, but the language barrier prevented any of that from happening.  I made the best of my meager budget and saw some of the sites and even managed to buy a lightweight tripod for my trusty flip camera.

It was to be a relaxing 5 hour train ride from Rome to Ostuni, on the heel of the boot of Italy, where the Santa Maria Del Sole staff would pick me up.  But the train ride proved confusing as hell.  Half way to Ostuni the train stopped and emptied out.

I was still drowsy from the flight and grabbed my bags and followed the passengers to a cluster of buses.  The bus driver could not speak English, or I should say I could not speak his Italian.  But he checked my ticket, and told me to get on board.  There was one seat left and I squirmed in.

As the bus pulled onto the highway I felt my pockets for my trusty Flip camera and it was missing.  I thought about the beautiful train shots and kicked myself now for taking out the camera.

How was I going to cover Souldrama without a camera?!