I began covering Souldrama events around the world just a few short months ago thanks to my BuzzBroz.com client and pal Bradley Quick introducing me to guide to the soul Souldrama founder Connie Miller.


This journey was cross country to Long Beach Island, New Jersey. The group was 90% American, people from coast to coast but mainly from New Jersey, with one student from Greece.

What made this event extra special for me as a Hollywood filmmaker was that Barnet Bain, producer of WHAT DREAMS MAY COME was in attendance and shared a viewing and discussion of the film deep metaphysical premise. Barnet is one of the true Hollywood visionaries and it was an honor to have him present and acting out key roles in all our dramas. His facilitation of Souldrama LBI was a triumph of the soul for him and for the brilliant Connie Miller for letting it evolve soulfully.

What was cool for me was to see how we all carry on the dramas of our life like some internal never ending show. It was, dare I say, far more exciting than going to the the typical commercialized, un-Barnet Bain-like, Hollywood movies to look, unflitered, deep, deep into the hearts of people who were mostly strangers until the group formed, but who felt like family as the 8 days drew to a close.

I got Barnet interested in Souldrama after hearing him speak on a radio talk show which I cover. And I was thrilled he got and gave so much from the event on LBI, an affluent island near Atlantic City that has 18 miles of beautiful beaches to enjoy.

In fact, I had such a wonderful time that I rescheduled an assignment in Malibu to enjoy the entire 8 days workshop and honored myself and the group by taking the time to properly finish this chapter of my work on myself, exemplified by this drawing of a safe house for my inner child that Barnet Bain and I created together. 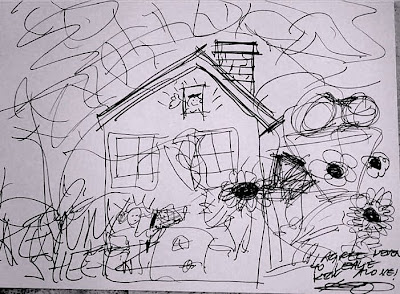