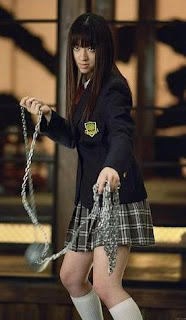 Gogo Yubari from Kill Bill
Hollywood is a maze. A series of dead ends. For a long time you don't know you are really in a maze because Hollywood is like Japan where the people never say "no" to your ugly mug.

They will literally kill you with kindness out here as you starve to death with no work. It's a waiting game and they want you to fail and go home. So they tell you how great your stuff is, while the leeches and scam artists, with their endless, "Let us help you thourgh the Hollywood maze," BS, drain your pitiful bank account. Your cash flows down the Hollywood drain like the blood in Hitchcock's famous "Psycho" scene. And before you know it, you're dead as Janet Leigh's Marion from loss of cash.
Great spoof here if you hate Lucas' Jar Jar Binks much as me:

I have this pal who has done some pretty big securities deals on Wall Street and despite my warnings he's been lured to the rocks by the siren song of Hollywood. I told him 60 days ago it would take him far longer to raise money for film than anything he's ever done. But he has not listened. 60 days later he's still getting the fund together. Amazed by how tough it is. I am not amazed.
Michael Douglas as Gordon Gekko from WALL STREET
Anyways my Wall Street pal calls to cancel lunch Wednesday because he's buried under getting this mega fund launched. If he's going to wait to reschedule our lunch until his fund is together I plan on seeing him when the Mayan calendar runs out and we're all dead as Janet in "Psycho". 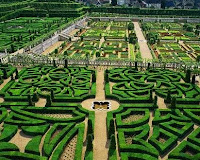 Today's classic example of the maze I live in out here: I call an exec I know at a major network to pitch a reality show based on my crazy as bat shit Hollywood life. I reach his assistant and ask to set a pitch meeting. He asks if I have a treatment the exec can review. I say, "I do!"
So the assistant says, "Cool. Attach the treatment to your email."
20 minutes later I get a terse email back from the network exec, likely sent in reality by the very same assistant, "It's a our legal policy never to accept treatments via email."
So I send an email back explaining I was directed to send the treatment along with my email by the exec's assistant. I hope I didn't get the assistant fired...
And did I hear back from the exec since this morning? Are you fucking joking asking a question like that, rube?! This will require a team of lawyers and a management consultant to straighten the fuck out. I'll be lucky to ever talk to that exec again.
Any who. My video take on the insanity that is Hollywood. I play the tourist idiot trying to find Paris Hilton. Great casting.
Posted by sheetzk at 6:54 PM