I was surfing YouTube on this rainy day, where I can't seem to focus on work, when I was struck like a freight train by a Joni Mitchell song that reminds me of my obligations to my best backer, my Uncle Jim.

Sadly, my formerly rich Uncle is suffering economically for his backing me in Hollywood. He stretched his money too far based on the false confidence I enjoyed a few years back. I feel like a total shit for not realizing how hard Hollywood would be to crack for what it's done to Uncle Jim's life.

What's my floundering for 3 years longer in the Hollywood maze than I imagined it would take done to my retired uncle's life? Try no medical insurance, no personal life and no savings. 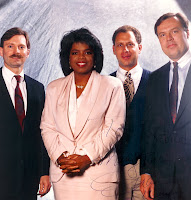 But in fairness to Jim's poor judgment and my false sense of confidence that took him down this rabbit hole with me to poverty, for my whole life Jim's watched me go from one huge success to another. I've built world headquarters for Target Stores and Oprah Winfrey (that's me far right next the queen of entertainment herself), negotiated over 1 billion worth of real estate and developed a 38 story skyscraper.

So how could he, or me for that matter, have known that Hollywood would be so fucking tough; that I'd struggle for 7 long hard years without a narrative feature film to my credit?

Sure Kids Talk Politics and Discover Me! have been great docs with lots of critical acclaim that I'm proud of.  But they've not been the kind money makers needed to repay Jim and my other backers.

My Uncle Jim is only 12 years older than me so he's more of a big brother figure in my life.  If karma means a thing I will succeed just so that Jim succeeds. Jim's a good man he deserves to be rich for what he's done to help me with the climb in Hollywood.

And unlike Joni's character in the song I won't leave Uncle Jim by the side of the road.

Oh, BTW, my brother Fred think our mutual Uncle Jim is not hurting as bad as he claims and is guilt tripping me. Seems like Jim is genuine to me but I'm too close to the situation and in some twisted way I like the pressure of life or death family drama. Spurs my horse onwards and upwards.

But time after time when Uncle Jim complains to me and wonders when he'll be repaid at long last, one of my buddy investors' words keep coming back to haunt me, "Never take money from family, Sheetz. It always ends in tears."