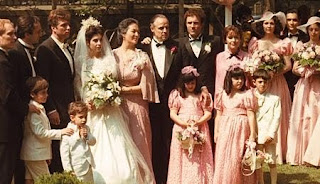 Wedding Scene from THE GODFATHER

Mom and Dad got divorced when I was but the tender age of 30. I had thought the way these two tried to kill each other so many times that I'd feel happy about their divorce. Instead I was stunned how deeply their official break-up bothered me, how strangely orphaned I felt.

Both of them quickly remarried and soon I ended up with two sets of parents.

1. Dad and a sweet stepmother named Jackie, from Oshkosh by gosh.

2. Mom and a tough but lovable Sicilian from Milwaukee named Nick.

This proved to be a nightmare for the holidays as both Mom and Dad and the new steps were spread hours apart. Plus there were my ex Gloria's father and his bride, the mother-in-law from hell, to visit.

The divorce, when I hit 40, simplified things a bit and I was down to two families for the holidays again. Nice and simple.

Simple that is until two Thanksgivings ago, 2007. That fateful year I, along with my brother Fred, visited Mom and Nick in Vegas where they retired to some 20 years ago. In fact Thanksgiving in Vegas had become a regular tradition for my 7 years in Hollywood, where Fred would visit with me a few days in LA and then we'd drive over to Vegas for a few days. 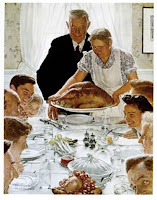 Mom's a great cook and her Thanksgiving feasts have been my favorites my whole life. So imagine how pissed I am that my stepfather has thrown a wet blanket on that day.

Back to Thanksgiving 2007 for how this holiday got whacked up. On his visit with me in LA Fred and I went to watch a football game at the Sportsman's Lounge bar in Studio City. The waitress suggested their spicy buffalo wings. Man, that waitress was not kidding; these wings were spicy as hell. Fred wouldn't touch 'em but that left more for me and I gobbled 'em down during the game.

The drive to Vegas the next day was a nightmare of short hops between gas stations, since I now had a case of the "Sportsman's Lodge spicy buffalo wing shits" that makes my butt hurt just thinking about it. Oh my aching writer's hemorrhoids. 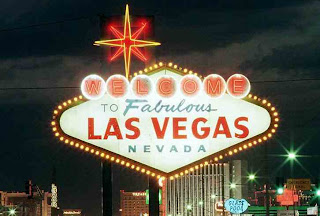 So when we arrived in Vegas I was not in the best of spirits. In fact, the entire first 3 days are a blur. Thanksgiving dinner is in there somewhere and I may have gotten down some mashed potatoes. I spent all my time alone in the condo while the family went out and partied. Nothing gets in the way of gambling for my family.

Thanksgiving 2007 was the truly worst vacation of my life and it was about to get worse.

After we saw Fred off to the airport and I started to pack, CNN reported a major fire was happening in Agoura Hills, Caly. Right where I lived. "Fuck me," I said as Nick had taught me in true Sicilian fashion.

Now, I'm allergic to the fire retardants that get in the air when there's a big fire. So I decided to stay over an extra night in Vegas at my folk's home. I was feeling a whole lot better and was ready to finally party.

But, as Mom and Nick gambled all their fun money away while I was busy shitting out the last Sportsman's buffalo wing in their toilet, all we did was sit in their little one bedroom condo and watch cable TV for hours on end.

Nick and I battled for the remote. I wanted to watch the news to see if my home was going up in fucking smoke but he wanted to watch old Turner Classics. Nick and my mom were approaching 80 at the time and so they liked to keep the temp about their age, about the low end of a sweat lodge.

And after being stuck in that sweltering condo, a toilet my sole companion for 3 days, I needed to cool the sweat lodge down a tad. So I snuck over to the thermostat and lowered it by one degree, hoping the natives might not notice.

A few minutes later my mom shouts from the back hall, "It's freezing in here! Who lowered the thermostat?"

Nick groused, "Not me," and glared over at me.

I grinned and said, "I confess. I lowered the temp one degree."

"Unbelievable!" bellowed Nick, "You want to give your mother pneumonia?!"

Here's the part where I should have calmly said, "Of course not, Nick. I didn't think it was that big a deal." But instead I said,

"One degree? You're busting my balls about one fucking degree?!"

"We're old! You want to kill us?" Nick hollered as Mom ran into the room, realizing she had somehow set off World War 3.

"Fuck you, you crazy old bastard! " exploded from my mouth.

So much for all my anger management therapy. I angrily tossed all my stuff into the car and shouted up the stairs at Nick and my horrified mother,

"Next time your husband ends up in a hospital for a heart attack don't call me to help. Happy fucking Thanksgiving!" 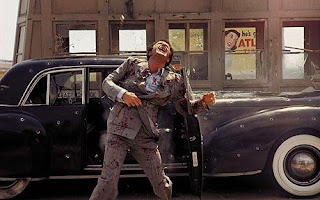 A few days later I apologized to Mom and Nick for my making things worse than they already were with my outburst. I explained that being sick all those days and the pressures of Hollywood had gotten the best of me.

Momma Mia quickly forgave me but Nick, who had been as close as a second father to me up until I spewed, "Fuck you, you crazy old bastard! " all over his living room, was not moved to forgive and forget.

For the next two years every time I'd call on the phone Nick would act like the black plague was on the line and hand the phone to Mom.

A few months later my brother, without my knowing or consent, would intervene. Nick said an "I'm Sorry" card, which I'd sent a week after my mouth explosion, and phone call apology were not enough. Nick told Fred that he needed me to apologize to him face to face.

I always listen to my amazing brother Fred, and so Thanksgiving 2008 I made the trip again to Vegas. I stayed at the nearby New Orleans Hotel and Casino, hoping as Nick promised to Fred that my eating humble pie would end the "One Degree Feud."

At Mom's turkey dinner I gathered my nerve, swallowed my pride, what was left of it after Hollywood, and went up to Nick just before the bird came. I profusely apologized once again to Nick in front of Fred and Mom.

Nick's response? A grunt of disgust and silence all through the meal. I shot Fred an "I tired." look of despair. The meal tasted like Sportsman's buffalo wings.

So this year I was not in Vegas for Thanksgiving at all. Not that I could afford to be with the mess my life is in right now. Two full years have passed in "The One Degree Feud" and, when Fred and Mom broached the topic of my forgiveness this 2009 Thanksgiving in my absence, Fred told me today in disgust, that Nick claims he never remembers that I apologized at all. 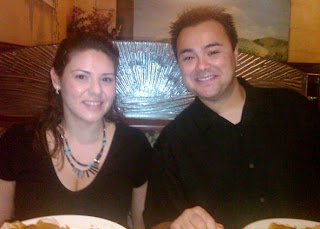 On the bright side I had a pleasant family free Thanksgiving dinner this year at Marie Callender's with my unbelievable roommates Gilley and Kim pictured above. But I still missed seeing Fred and Mom. 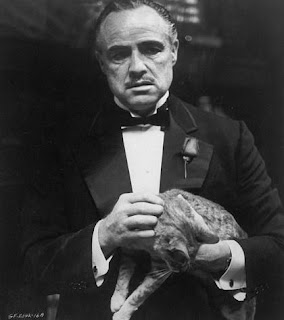 Moral of the story: Never get on the bad side of a Sicilian... even if he is your stepfather.

Any who, some fans who've read my Italian stories ask me how the dialogue is so authentic. Now you know. Here's a taste of the sauce.