Gilley Grey & His Magic Bag to the Resuce

Wow. Did you ever have one of those days? Well, if you ever do it'll be OK if Gilley Grey and his magic bag are around to save the day. Why? Because Gilley Grey, top Hollywood stutman/coordinator, producer and founder of Q2 Studios, has a gift, the gift to always have whatever you need in his magic bag. 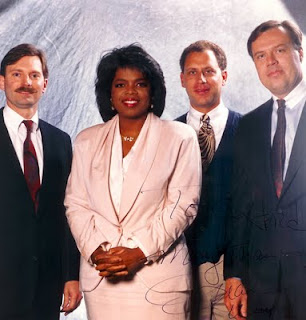 I met Gilley this past summer when he sought me out for advice on his new Q2 Studios in New Mexico. Why me? Because I built Oprah Harpo Studios, so I know my way around a construction site.
John Lamb, Oprah, Jeff Jacobs, Ken Sheetz

I liked Gilley instantly and happily introduced Gilley to my pal Jim McShane, of McShane Construction, another can do spirit, and the two hit it off.

When I hit rock bottom in the bad economy two weeks ago and, yes, ended up evicted from my luxury apartments, Gilley pulled a guest bedroom with it's own private bath out of his magic bag for me to crash in. A recovery that's coming along nicely with my new BuzzBroz company doing video content creation and Social Networking to build buzz.

This morning I woke up only to find my Apple G5, usually super dependable, was frozen up and needed to go into the Apple shop. So I thought I was out of business for few days. But Gilley dug into his magic bag and pulled out a spare laptop computer.

As I sat in amazement while Gilley set up the laptop, grateful as hell, he started to tell me the story of his magic bag that always seems to have what people need, from checks that saved another pal's home to the button for a girl in an airport in this video GILLEY GREY'S MAGIC BAG.

I have to thank Oprah one day for the thread that brought Gilley into my life. We are going to make a lot of magical movies together.
Posted by sheetzk at 9:28 PM