I finally got the 50 Cent Wanna Be quieted down in the apartment below my now peaceful apartment when there arose the thundering herd of foot traffic over my head. Parties rolled at all hours. Work and sleep became impossible.
One day the washer from upstairs overflowed and it rained dirty laundry water all over my place. So I finally went upstairs to complain. A cool black guy named Shaylin opened the door and invited me in for coffee.
A THUNDERING HERD OF ACTORS 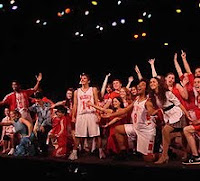 There were sleeping bags all over the place and as many as 20 half dressed actors coming and going as we sipped coffees and talked about my recent trip from Chicago to be a filmmaker at the tender age of 50. Shaylin said he'd do his best to keep the troupe quiet.
WAVE
Shaylin and I got to be such good pals that he appeared in my first Hollywood production, a short called WAVE. He's the guy in the pet store scene. I have to laugh at some of my poor lighting and editing choices.

Worst of all the sound was bad and I had to redub a lot of the audio in post. But I learned a lot from this first film that I made all by myself with my trusty new Canon XL2 and Final Cut Pro. I did not in fact use a script. I wanted to improvise the whole thing based on an outline. Yeesh!
Learn about my hopeless crush on Sarah the beautiful star of WAVE next blog:)

Knowing I was an aspiring director, the actors acted quiet for me upstairs. Things fell into a nice pace. I was making calls and finally getting reads from some major studios like New Line, Tapestry Films, Plan B, End Game, Spyglass (thanks to my backer pal Rick) and Davis Entertainment for my six screenplays I had written before coming to Hollywood. All without an agent.
NEVER WALK BEFORE YOU CRAWL IF YOU CAN HELP IT
But without star attachments I was still getting nowhere. Which is what had led me to buying all my own gear and making movies myself to learn the trade. Ignoring the fact I was not really learning how to put a professional movie together. 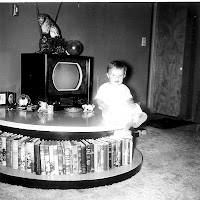 I'm good at ignoring things when I want to get things done. I walked at 8 months old before I learned how to walk. I tend to learn things backwards. That's why I moved to Hollywood at 50 instead of 20. And I had already shot two 35 mm shorts back in Chicago before making DV films. Backwards.
Eventually another neighbor ratted to the landlord about the 20 actors stuffed in that 2 bedroom apartment, including one regular from "Law and Order." No scarcity of irony in Hollywood. It was wonderfully quite after their eviction.
SAVING PRIVATE SHEETZ
But not for long. Now one actor would move in over my head. A Golden Globe nominated actor who was noisier than the whole 20 actors put together. I didn't know he was an actor at first. And I certainly did not know this guy who sang like a wounded beast on an amp cranked up to the max all to bad organ music he played 24 - fucking -7, who jumped on the floor so hard he knocked a painting off my wall, was Tom fucking Sizemore.

I'll never know if Heidi Fleiss was the one
getting tossed around up there. 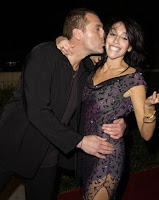 Wait! I fact checked Tom's IMDB page for the blog and this story just in: Sizemore arrested yesterday for spousal abuse.
Yeah, I seemed to hear of that stuff going on. I was reliving those nights when I'd be called out of bed by Mom screaming for me to help to break up a fight with Dad. One day when I was about 18 I'd toss my drunken father down a stairway. Last time he ever messed with Mom while I was living at home. No wonder having Tom Sizemore going nuts over my head was driving me nuts.
And all this while I was in a war with a producer I'd attached to a project who hated my guts. Scariest of all I was running out of money. All my wealthy pals back home thought I had lost my mind going to Hollywood. And they were right.
Posted by sheetzk at 7:56 PM